The French may lay claim to Champagne, the Belgians can boast about their beer, the Japanese should continue sipping their sake – and the Greeks are most welcome to their dubious role as the originators of ouzo. For in London, we have gin: a most quintessentially English drink, it is as much part of this city as Big Ben, the River Thames and the Queen.

Gin, however, had rather less illustrious beginnings – and, to be honest, it wasn’t even originally British… Gin derives from the juniper-flavoured Dutch liquor “Jenever”, which became extremely popular in England in the 1600s after our armies fought alongside those of the Dutch King William of Orange, giving rise to the expression “Dutch courage”. William went on to become King of England and gin went on to become our favourite tipple. As gin-mania took hold of London, every man and his dog set up a gin still (in which the spirit is distilled) at home, churning out pints of lethally-strong, pungent booze. Juniper was then – as it is now – an essential part of the drink, but whereas now it enhances gin’s flavour, back in the 17th and 18th centuries, the spirits being produced were so rough that botanics were used to cover up the horrendous turpentine flavour. So in 1751 the Gin Act came into force, making it a legal requirement for anyone distilling gin to buy a license for the astronomical sum of £50. This was far too much for most folk, whose homemade gin was now automatically classed as moonshine. Only the wealthiest families could afford the license and went on to produce top-quality gin, creating world-renowned brands such as Tanqueray and Gordon’s. These distillers have long since moved out of London, however, taking their production to a global scale and, in the process, abandoning the traditional methods in favour of more economical means of mass-production. 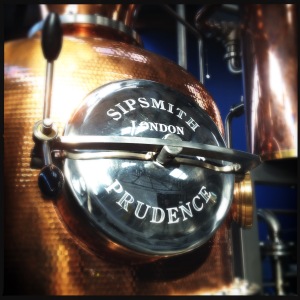 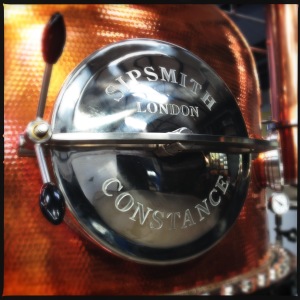 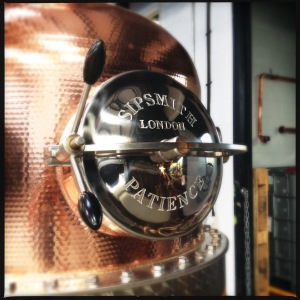 Though the big names may have left town, the traditional art of London gin distillation has not been lost. On 11 January 2008, childhood friends Sam Galsworthy and Fairfax Hall opened Sipsmith, the first copper distillery in London for over 200 years. The timing for such a bold new venture would have put the fear of God into lesser men for, on the very same day that Sipsmith launched, the London Stock Market (the FTSE 100) suffered its greatest ever fall, thus kicking off the recession in the UK and prompting the then Prime Minister Gordon Brown to advise his subjects to proceed with “economic prudence”. Sipsmith took Mr Brown’s advice very seriously… and named their first copper still “Prudence”. Their bold move paid off and, almost seven years later, “Prudence” has been joined by “Constance” and “Patience”, three curvy copper beauties that reside in Sipsmith’s West London distillery. In the words of Observer Food Monthly: “Sipsmith has spearheaded a revival in London gin – although it’s hard to think that anyone else will go to quite such lengths for authenticity.” But where Sipsmith has led, many others have followed, with old-school gin distilleries popping up all over town. 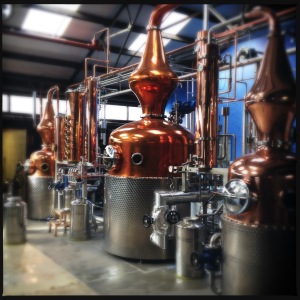 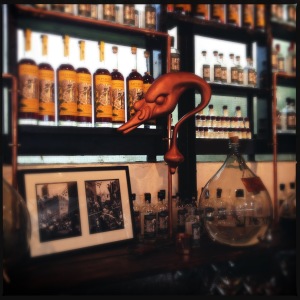 Sipsmith’s dedicated team of eccentrics make spirits the old-fashioned way; their methods are extremely labour-intensive, time-consuming and produce tiny yields… but this is what makes the results so very special. Whereas one could compare the method for mass-producing gin and vodka to making orange juice from concentrate, Sipsmith’s artisanal spirits are made more along the lines of freshly-squeezed juice, or cold-pressed extra virgin olive oil. The vodka contains only English wheat and water, but the ingredients list of gin is rather longer, which is what makes it a rather more nuanced drink with many different aromas and flavours.  Jared Brown, Sipsmith’s master distiller, has created a recipe for the London Dry Gin that features a heady mix of juniper berries, coriander seeds, lemon peel, orange peel, cinnamon bark, cassia root, liquorice root, almonds, orris root and angelica root. Meanwhile, distiller Ollie Kitson was tinkering with his latest experiment in a “rotavapor” (a miniature still): a mince pie-flavoured gin that sadly won’t be on sale to the public, but will be sent to very special clients for Christmas (now that’s a Christmas list worth being on!) One of the newest and rarest additions to the range, which is available to all, is the Sipsmith VJOP: Very Junipery Over-Proofed gin. This giant of a gin has 57.7% ABV (Alcohol By Volume – most gins are between 37 and 47%!) and loads of juniper berries are added at various stages throughout its production, making it rather special – only four batches have been made in the 12 months since production started, which has done nothing to dampen the ardour of the finest bar tenders in town. I love Sipsmith’s Damson Vodka (you may remember my penchant for this lovely fruit when I eulogised about it in September): a tart and plummy, wonderfully full-bodied drink made by steeping fresh English damsons in Sipsmith’s own gorgeously smooth Sipping Vodka. If you’re a fan of mixed drinks, I would highly recommend the bold, complex and aromatic taste of their London Dry Gin for a perfectly-balanced Gin & Tonic or a smooth Martini. Whilst in the company of Sipsmith’s Georgie Woods, a self-confessed Martini Maestro, I took my chance to ask her for a few tips… 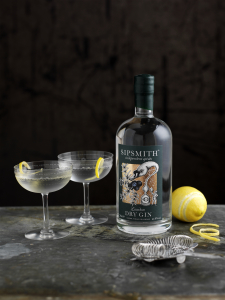 There are few better ways to get a party started than with a Dry Martini – it’s timeless and elegant, whilst being potent enough to really break the ice. How you take your Martini is very much a matter of personal taste, but the Sipsmiths like theirs dry, with a twist. With just three ingredients, it’s deceptively complex to mix but there are a few guidelines to attain the perfect Martini: 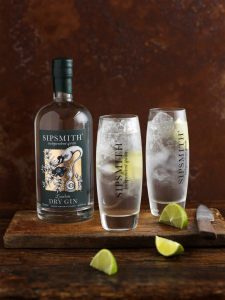 A well-made G&T is wonderful… but when poorly-made, it can be an absolute shambles (I’m talking about a single measure of low-quality gin sloshed into a glass over watery ice cubes, filled up with tonic from a bar soda dispenser and topped off with a tired slice of lemon that arrived in a catering pack. Hideous.) So how should one make a truly excellent G&T?

This cocktail was named after a French field gun of the same name for its comparable effect on the drinker. You will wonder what’s hit you after drinking one of these… but you’ll know it tasted extremely good! If Champagne seems a little extravagant (but then that’s the whole point of cocktails, in my book), you could use a good quality sparkling wine.

I was introduced to a very tasty variation on the French 75 by mixologist Kai Dunn at Bistro Union in South London:

A version of this article first appeared on the Journal of Wild Culture on 17 November 2014.