Some of the best recipes, I reckon, are the ones with the least ingredients. Granted, the ingredients therefore stand out more, so the result is highly reliant on how good these are in the first place… you’re not going to make an omelette delicious if you use eggs from battery hens, no matter how good your method, or a scrummy salad using limp lettuce from a sweaty plastic bag and hard, tasteless tomatoes out of season. But a few corking ingredients can make the best meal ever – one of my favourite dishes uses fresh white crab meat, creamy avocados, plump cherry tomatoes and zingy pink grapefruit. Add a few herbs, seasoning and top-notch olive oil and you’ve got an absolute winner on your hands (which is why I made it recipe of the month in July).

Jam and preserves are perfect examples of simple, top notch ingredients yielding fantastic results. At Treverra Farm, we have had some gorgeous fruit already this year: strawberries, raspberries, rhubarb, currants of all colours… The charms of strawberry jam are utterly obvious, but not any less appealing, all the more so when you’re eating the jam just metres from where the fruit was picked. Early in the summer, before our own strawberries had arrived, I made a batch using bought (yet still Cornish) strawberries. It’s good… but the batch I made a few weeks later using our own fruit was worlds apart – dark, oozy, juicy strawberries that hadn’t been subjected to polytunnels, packing or travel, their flavour and plumpness was out-of-this-world. 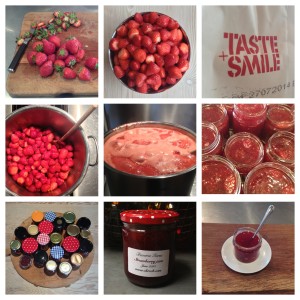 Next up, the garden rhubarb. I decided to pair this tart treat with vanilla, which turned out to be a lovely combination and worked very deliciously spread on toast, but also with natural yoghurt, cheese and – as Charlie observed – by the spoonful from the jar (the gluten-free option, he proffered).

The heatwave rolled on through July and, come August, the currants were ready for action. Red and white currant jelly is a brilliant condiment to have on hand for roast lamb and other meats and also for using as a glaze on slow-roast pork and in sauces to give piquancy and sweetness. My blackcurrant sorbet was almost too intense (almost), the blackcurrant jelly is syrupy, dark and divine (jelly as in smooth jam, not the wobbly kind, but that’s given me an idea for next summer…) The blackcurrant vinegar is my personal favourite – I use it as I would a syrupy balsamic (find out how to make it in the August recipe of the month).

Even if you don’t have a garden of fruit to pick, I would heartily recommend getting stuck into a bit of jamming, bottling and preserving right now with seasonal, local fruit. The long, hot summer has given the fruits a lovely flavour and ripeness and there’s loads to choose from: blackberries, plums, apricots, bilberries, blueberries, figs, greengages, loganberries, raspberries, redcurrants, strawberries… Take advantage of what’s plentiful and in season now, get jamming and you’ll be thankful for every summery spoonful and delightful drizzle throughout the colder months ahead.

There’s been a distinct lack of blogging over the past few months, but I can sum up the food side of things pretty quickly: the weekend meals for my Swiss family have been overwhelmingly Valaisan (of Valais, the canton we are in) usually involving terrifying quantities of Bagnes cheese, jambon cru, Gruyère, viande sechée, Fendant, Pinot Noir (the latter two aren’t even food, but are very local, nonetheless) plus some comforting homemade lasagnes, pies and pizzas, too.  But there have also been a few seasonal highlights where I’ve been able to do something a bit different: roast leg of spring lamb from Savolèyres (one of the mountains that rise over Verbier) with garlic, lemon & herbs and capretto (kid goat) braised with tomatoes, black olives & thyme, served for Easter Sunday lunch (another family tradition from the Italian side) with griddled polenta and roasted Provençal vegetables.  For desserts, I’ve often chosen well-loved classics from all over the world that have now become firm family favourites: Pavlova with berries, apple or pear Tarte Tatin, crème brûlée, chocolate fondants with vanilla ice cream…  In the quest for new, it can be easy to forget the sheer brilliance and universal appeal of these wonderful dishes, so it has been good to spend the winter tweaking and perfecting a few of them.

We have just one week left in Verbier and yet, amazingly for late April, the snow still falls, giving us as much as 30cm of fresh powder overnight and huge grins on our faces as we continue to enjoy skiing conditions more typical of late January.  This has, on balance, been the most incredible season for skiing… yet already the Big Swede and I find ourselves yearning for Cornwall.  For the Swede, I know that the lure of the ocean and his quiver of surf boards are the main draw.  Yet, while I long to feel the rhythm of the waves and smell the sea air, it’s the anticipation of the Cornish summer ingredients that is getting me going.  First of all, the seafood: bass, bream, mackerel, crab, oysters, squid, monkfish, sole… served with salty Samphire, the pure essence of the sea.  Endless possibilities for salads and side dishes, with a kitchen garden at my disposal and limitless combinations of ingredients, drawing inspiration from all over Europe and across the Mediterranean to the Middle East, even as far as south-east Asia.  There are also the fruits of last autumn’s labours to enjoy: the 10 litres or so of damson gin (not just a good warmer for the colder months, but also delicious with tonic water in the summertime), chutneys and damson ketchup, which has spent the past few months maturing and mellowing, ready to enjoy with Cornish cheeses, sausages and local cured meats, not to mention the barbecues (thinking positive here: we WILL have plenty of sunshine this summer!)

But before we arrive in Cornwall mid-May, we have a few other treats to look forward to: a one-night stop in Épernay to enjoy Champagne’s eponymous tipple, a few days at Mother Chef’s in Dorset and then a long weekend in London, including a dinner at Jamie Oliver’s restaurant Barbecoa, a celebration of wood-fuelled cooking in its many guises.  After five straight months of Alpine stodge, our tastebuds will think all their Christmases and birthdays have come at once.

When I wrote my last blog, I knew we were teetering on the edge of summer, ready to topple head-first into autumn… but I had forgotten just how impressive Cornish sideways rain can be, thanks to gale-force winds straight off the Celtic Sea.  However, Cornish flora – just like the fauna (I include native Kernowyon in this) – is made of strong stuff and, despite spending storm-ravaged nights convinced the roof would blow off our little cowshed (that’s if it wasn’t crushed by a falling tree first), Treverra has survived the autumnal storms so far and is looking lovely (no small thanks to the team who keep it all going, with special creds this week going to the boys in rubber who spent two days in masks and wetsuits repairing the magic pool cover).

Ironically, given the tempestuous weather, we’re experiencing a lovely little lull right now, a calm patch in between the busy summer and October’s half term holidays and shooting parties.  With the tourists mostly gone (except in Padstow – it seems it’s always busy in Padstow), the Cornish roads are emptier (and safer without Rock Mummies careering around in Chelsea tractors and their big-wig husbands taking road rage to new heights) and the beaches are tranquil.  But the hedgerows and trees… they are busting out all over the place with apples, damsons and autumn berries.  So, what’s a girl to do except buy 8 litres of gin and get stuck in?  Ahhh, damsons, you sexy little things – eye-wateringly sharp, yet with a wonderful depth of flavour and a velvety, delicously dark hue.  With Hurrican Katia rampaging outside, I turned about 4kg of damsons picked from the field next door into damson ketchup (a Mother Chef special recipe) and another 5kg into damson gin, its aromatic, boozy fug enveloping the house.


To save having to stone the damsons by hand, I just very gently heat them until the juice runs and they go soft enough to put on the rubber gloves and squeeze them through a colander, pushing the pulp and juice through into a large pan and trapping the stones, being careful to put all the pulp back in the pan.  Add currants, onions and the bag of spices.  Add 1 pint of the vinegar, bring to the boil and simmer gently, uncovered, for about 30 mins or until mixture is soft.    Then remove the bag of spices, place contents of pan in a liquidiser and blend until perfectly smooth.  Rinse out the pan and return the purée and bag of spices to it, add the salt, sugar and remaining 1 pint of vinegar.  Bring to simmer and cook gently, uncovered, for 1½ – 2 hrs or until the ketchup has reduced to approximately 3½ pints.  (From experience I know that you should have it slightly thinner than you would like it when you bottle it as it thickens as the months/years go on – especially years!)  Stir occasionally to prevent sticking and leave to cool for a few minutes before pouring into bottles.  The recipe tells you to then sterilise the bottles for 10 mins, I never have done and have never had a problem with ketchup going off so I wouldn’t bother if I were you (that’s my mother for you – cavalier as ever, and usually she gets away with it, but I’d advise you to wash and rinse the bottles thoroughly and put them in an oven at 90°C for 10 minutes to make sure they’re sterile before filling them).  Leave for at least 6 months before eating to allow the ketchup to mellow.

Sadly, due to damsons’ tannins, the gin and ketchup need to mature for a while before they are fit for consumption.  Luckily, there are a few other Treverra-made treats to sample in the meantime: apple & rosemary jelly, “44” (a Madagascan recipe where you steep an orange, 44 coffee beans, 44 teaspoons of sugar and a few vanilla pods in a litre of gin for about 44 days – if a measure of that doesn’t warm you up in winter, I can only suggest a second, third or even fourth attempt…) and raspberry vinegar.

Typically, this being Cornwall, my cosy, autumnal domestic bliss may be short-lived.  Apparently we are getting an Indian summer on Wednesday, bringing blazing sunshine and temperatures well into the 20s (for a couple of days, anyway).  Which is most excellent news – my damsons are dealt with, the garden’s looking lovely, the pool cover is fixed – bring on the Pimms and a bikini.