In my family, the BBQ season has been known to start as early as March.  In fact, as long as there’s not actually snow or frost on the ground… GAME ON!  Even rain doesn’t stop play – just find a bit of shelter and it’s all good.  (Perfect example was many years ago at my dad’s birthday BBQ on 6th July – the rain started at 4pm and didn’t stop.  Undeterred, my Uncle Rob – Head BBQ Chef for the night – stationed the Webbers in an open-sided, roofed area behind the house and cooked his way through the steaks, seafood and chickens in order to feed the 70 guests.  The guests, for their part, felt sorry for him outside so kept the booze flowing in his direction.  3 hours and about 60 units of alcohol later, Rob emerged red-eyed from the smoke and a bit unsteady on his feet, to announce: “I’m nissed as a pewt.”  Bravo, sir.) 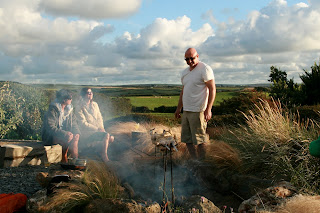 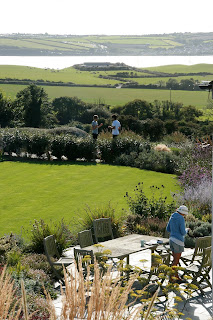 BBQs have always been a big favourite here at Treverra Farm and this summer has been no exception, but we entered a whole new league with the unleashing of the fire pit for some hardcore Argentinian asado action the other night.  The lovely Loftuses arrived with five organic, free-range chickens that had been spatchcocked and then were marinated in olive oil, lemon & rosemary.  A make-shift spit was created out of some metal stakes, the chickens were skewered and then suspended over the fire.  Watched by his team (fuelled by Dark ‘n’ Stormies and Provençal rosé), Charlie was a man on a mission, braving the searing heat to baste the chickens, rotating and adjusting them until they were cooked to succulent, smoky perfection.  Add a perfect Cornish summer’s evening, with some potatoes baking slowly in the embers and some salads from the garden, we couldn’t ask for more… the arrival of our neighbours in their helicopter overhead was simply the icing on the cake (thanks to Jo for the fantastic aerial shot). 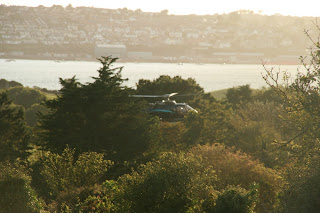 Dark ‘n’ Stormies
Half-fill a glass with ice cubes, then add a slug of good dark rum (Morgan’s Spiced is great here), top up with ginger beer (Old Jamaica has a nice kick to it) and squeeze in a couple of wedges of lime.  Most importantly, make sure the BBQ chef’s glass is topped up AT ALL TIMES.
But Cornwall is, without a doubt, one of the best places to get seafood that I’ve ever known and it’s at the heart of many dinners here.  I am very lucky to get my fish from Matthews Stevens & Son, based in Newlyn, who have supplied me for the past two summers with gorgeous, locally-landed fish. On Thursday evening, with 10 for dinner and the sunny days stretching on, I rode the Mediterranean vibe I was feeling and looked to Ottolenghi for inspiration.  One of my favourite chefs, his recipes really come into their own during the summer – fresh, light, delicious dishes that are perfect for relaxed, communal eating.  As I prepped the salads, the Big Swede got the BBQ going, throwing fresh herbs onto the coals for added aroma and then cooking three large grey mullets that I’d prepared:
Whole grey mullet for the BBQ
You can use other whole fish here, like rainbow trout, salmon, sea bass, etc – grey mullet just happened to be available and particularly good at the time.  Ask your fishmonger to scale and gut the whole fish, then stuff the belly with herbs (I used coriander and flat-leaf parsley), slices of lemon & lime – ginger and chillis are also good.  Sprinkle olive oil in the belly and season.  Cut a few slits in the skin and rub with olive oil, sea salt & black pepper, then wrap in foil.  Once the BBQ is ready, cook for about 10 minutes on each side until just cooked through, then you can lift the flesh off the bone onto a warmed platter, scatter with chopped herbs and serve with wedges of lemon.

Remove stones and slice nectarines vertically into 6 wedges, then toss in olive oil, salt and pepper.  Heat up griddle and char the slices to give them distinct grill-lines on all sides.  On a platter, lay out torn endive, the Prosciutto and the nectarine slices, then scatter over the baby chard leave and drizzle with dressing of olive oil, Balsamic vinegar, maple syrup, rosewater, salt & pepper.

Blackberry tart (recipe adapted from the Cherry Tart recipe in Bill Granger’s book “Holiday”)
To make the pastry, melt and cool 125g unsalted butter, then mix in 90g caster sugar, followed by 175g plain flour and a pinch of salt to make a soft dough.  Press the mix into a greased, 24cm round, loose-bottomed tart tin, place onto a baking tray and cook at 180°C for 12-15 mins until the pastry is puffing up.  Remove from the oven and sprinkle 2 tablespoons of ground almonds over the base, then leave to cool.
For the filling, whisk together 170ml cream, 2 eggs, 2 teaspoons of vanilla and 3 tablespoons of caster sugar. Add 2 tablespoons of plain flour and whisk until well mixed.  Arrange a couple of large handfuls of fresh blackberries (or cherries – stoned and halved – or other soft fruit that’s in season), slightly overlapping, over the pastry base and pour the cream filling evenly over the fruit.  Return the tart to the oven for a further 40-50 minutes until the filling is firm.  Leave to cool and serve with cream or ice cream.
Crème fraîche sorbet
In a large bowl, whisk together 2 cups crème fraîche, ¾ cup cane syrup (if you can find it – I mix half & half golden syrup with homemade sugar syrup), a good pinch of salt, ¼ cup lemon juice and ¼ cup sugar (I didn’t have quite enough crème fraîche this time, so I made up the quantity with a bit of vanilla yoghurt and it worked beautifully – I may be onto something…)  Chill the mix in the freezer for about 15 mins and then transfer to an ice-cream machine to chill and churn for about 30-45 mins (check your machine’s guidelines).  Keep in the freezer – this is best made the day before to give it time to firm up and then it’s best eaten within a few days of making.
True to form, I made more food than even 10 hungry mouths could eat, but the great thing about all the dishes above is that the leftovers make for no-effort lunches over the next couple of days, leaving you to enjoy the last hazy, lazy days of summer… isn’t that what it’s all about?
Follow on Twitter @LauraLPope