No sniggering at the back… this is a serious problem. My little urban garden has been repeatedly engulfed by a seemingly innocuous, almost attractive plant, that is in fact a rampant nuisance. Morning glory (so called because the flowers bloom with the sunrise) can be gorgeously colourful (I particularly like the rich, ultra-violet varieties) but my flowers are few and far between, and boringly white. I wouldn’t mind it so much were it not for the fact that it takes over EVERYTHING – whether living or inanimate – at the rate of knots. So far, it has smothered the lobelia I planted, throttled the ancient roses, coiled itself around the potted trees, elbowed its way past the geraniums – and it’s even trying to consume my garden table and chairs. 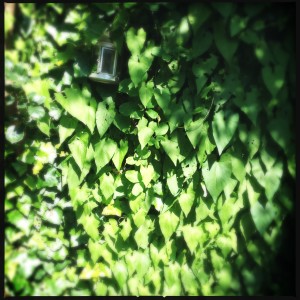 Morning Glory going wild. There are about another five lanterns under there…

So, today I took a stand and tackled the morning glory. Like a woman possessed, I snipped, tore and prised the clingy tendrils from the trees, trellises, bushes and plants. While I was on a roll, I weeded the gravel, pulled out all the potted herbs and plants that had fallen victim to slugs and other predators, snipped back the branches of the elder tree that hangs over my garden from next door (thanks for the elderflower cordial in May, neighbours!) I filled up two enormous bags with my garden cuttings, swept and hosed down the decking and I even scrubbed the dark purple pigeon poo from my sun loungers (thanks to them stuffing their beaks on berries from the ever-bountiful elder tree). 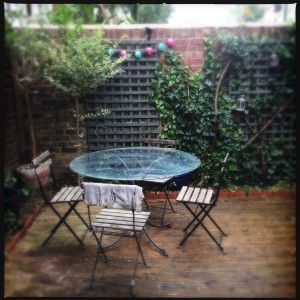 My garden now feels somehow bigger. Although it really was a job that needed doing, it looks a little bare, as if it’s had a particularly brutal Brazilian wax job. Perhaps I need to learn a little finesse in the art of gardening, but at least Douglas now has easier access to the gap beneath the fence that divides my garden from my neighbours’, who have a sweet little dog called Rosa. Theirs seems a funny relationship as she regularly pines for him while he stoically gives her plaintive whines a stiff ignoring… only for him to then spend ages pinned to the fence when she’s not there, waiting for a sign that she is on the other side. Their little Pyramus & Thisbe routine is rather sweet, if a tad puzzling, but I’m sure that the sight of me ripping up the garden didn’t exactly make much sense to Douglas, either. Well, he’d better get used to it… the rate that bloody morning glory grows, I’ll be doing it all again in a few weeks. 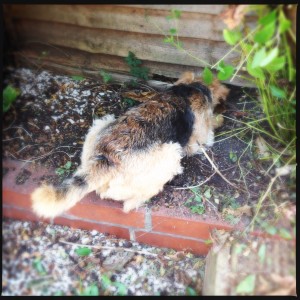 Douglas waiting in vain for Rosa to make an appearance